PET and the hidden complexities of plastic recycling

Superficially, recycling plastics seems straightforward – you just reform the plastics from a bottle and re-fashion them into something else. If only it were so simple.

In a variety of work that I’ve been involved in recent years with colleagues, we’ve been questioning what really gets recycled, what it gets used for, and how the situation can be improved.

Take, for instance, one of the best-known, widely recycled polymers: polyethylene terephthalate (PET). This was the subject of recent work Eunomia undertook for Plastics Recyclers Europe (PRE).

Within packaging, PET is often used in manufacturing beverage bottles. It’s also used in other (non-beverage) bottles and jars, as well as various forms of plastic tray. In the resin identification code system – the numbers inside the recycling triangle on pieces of plastic packaging – PET is identified as number 1. These codes were introduced partly to help collectors and recyclers determine what they should accept for recycling, but, as we’ll see, it’s not simply a polymer-based decision.

Here in the UK, almost every local authority asks households to separate at least some plastics for recycling. However, they will generally be asked to put all of the plastics in the same container – often alongside other materials. This means that all the PET – bottles and trays – is collected together, along with other plastics which the local authority may (or, indeed, may not) ask householders to present for recycling.

Local authorities have always had some choice regarding what they ask households to recycle. Most household collections of plastic in the UK started as ‘bottles only’, and several other countries have followed that path. However, the pressure to collect a wider range of plastics has mounted as the diversity and quantity of packages manufactured from plastic has expanded. Well-meaning residents will have asked, ‘why shouldn’t I be able to put this tray in my plastic recycling container if a bottle with the same resin identification code is acceptable?’ – and assuming there would be no problem, erred on the side of inclusivity.

Now, nearly 80% of UK local authorities accept plastic pots, tubs and trays, alongside bottles, in their recycling collections. Unfortunately, one of the key morals of the recycling story is that less is sometimes more, and expanding the range of things collected might actually create complications.

So, what happens to resin number 1 today? After collection, it hitches a ride to a sorting plant along with its brother polymers, and probably some other materials as well. The sorting machinery is pretty amazing these days, but there still are some challenges to be confronted. Depending on how many stages of sorting there are, the PET may end up in bales of different materials; perhaps a bottle rich mix, or primarily clear PET, or largely coloured PET, or mixed PET. Different facilities will produce different outputs, and these will be more or less attractive to recyclers.

Right now, the market for food-grade recycled PET (or rPET) is pretty ‘hot’. Brands are under pressure to up their game in terms of preventing the littering, with beverage brands in the vanguard. Their instantly recognizable products are amongst those plastic items found in greatest numbers littered on beaches. While adding recycled content has no direct benefit in reducing the 8-12 million tonnes of plastic that end up in the ocean each year, the response to the issue has been a rash of corporate commitments on recycled content, as brands try to signal that they take the issue of waste seriously.

Commitments to use rPET are driving up demand, and thus market prices. Food grade rPET pellets are now more expensive than the equivalent virgin material. So, you’d think we’d be getting as much PET into recycling as we could.

Well, as I said at the start, it’s not so simple. For food safety reasons, there are restrictions on what recycled materials can come into contact with food and drink products. In essence, if more than 5% of your recycled material originated from somewhere other than a food package, then it can’t come into contact with food. So, for food grade packaging, we want rPET that has originated from food packaging.

But not all PET is used in food packaging, and in the UK, PET from all sources generally gets bundled together, to be separated out again at a sorting plant. It turns out to be a little challenging to accurately sort PET food packaging from PET non-food packaging.

After sorting, PET typically undergoes further sorting, grinding and washing to produce PET flakes. To make bottles, a further step is required, with the flake being converted to pellets, from which (usually with some material from virgin feedstock) the new bottles are made.

PET trays, though, are not really made of the same form of PET as bottles. The manufacturing process makes them more brittle, so when they go through the grinding and washing process to make flakes, they tend to fragment, and a lot of the material is lost along the way. That’s interesting because most PET trays being recycled into flake today seem to come from sources, such as the UK, where sorting plants produce bales that are mainly PET bottles, but with some PET trays still included. 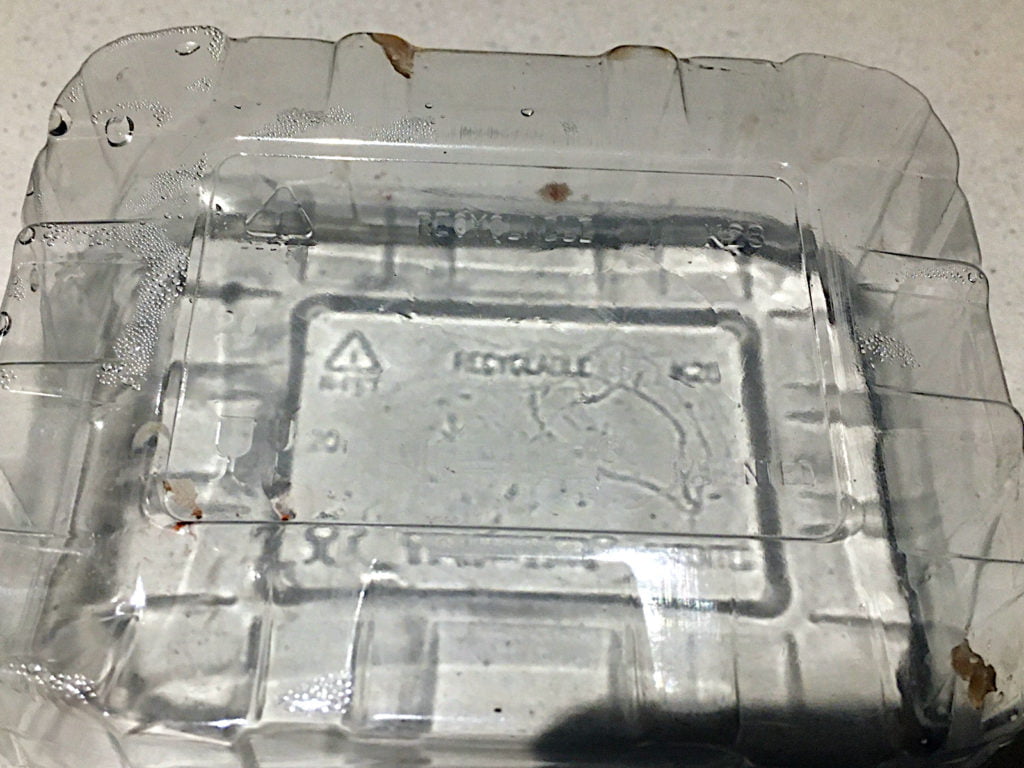 Tray compliqué? The piece of packaging, embossed with the word “recyclable”, that inspired this blog. Photo: © Dominic Hogg, used by permission.

In these cases, it might not be straightforward to know whether the rPET is genuinely suitable for use in food contact applications. Food trays may already have some rPET in them, and that might have come from the type of source which cannot be used in food contact applications: non-food grade rPET can be used in food trays as long as the rPET does not come into contact with the food (a separate layer, or layers, can be added as a barrier between the rPET and the food). But if new rPET is subsequently made partly from such trays, it’s more or less impossible to be satisfied that it can come into contact with food under existing regulations.

It doesn’t have to be this way. Countries that operate deposit refund systems for beverage containers are effectively keeping most of their PET bottles (most of the beverage bottles) quite separate from their PET trays. The country with the highest recycling rate for PET bottles is Germany. The vast majority of bottles are recycled, but in 2017, only around one third of the rPET was used to manufacture new bottles. What happens to the PET trays? Many are collected and sorted for recycling, but they are actually incinerated or co-incinerated because of the technical snags involved in recycling them. Either the tray needs to change, or the recycling technology needs to improve.

Across Europe, it seems that the vast majority of PET trays are not really recyclable today. If they are recycled, it’s by virtue of being ‘tolerated’ as part of a stream of material where low concentrations of PET trays are mixed up with bottles. Even then, the loss rate means that the yield from trays which enter recycling facilities is low.

Where does that leave us? I’m left wondering whether the embossed word ‘recyclable’ on the base of PET trays is really appropriate. Scotland has already committed to introduce a deposit return scheme (DRS) for beverage packaging in 2022 and the rest of the UK is expected to follow suit. Assuming that the DRS is well designed, and delivers high return rates, then there will be far fewer PET bottles in the household waste stream in which to ‘hide’ the PET trays. At that point, unless the technology is developed, then PET trays will, as in Germany, not be recycled – they will be unrecyclable.

Current guidance from WRAP under the UK Plastics Pact proposes, however, that PET trays are considered ‘recyclable’ as long as they can be detected by sorting equipment. The same Guidance notes, however:

‘PET pots/tubs/trays have lower intrinsic viscosity meaning they are more brittle than bottles, resulting in a higher chance of them breaking into fines. The extent of the yield loss is unquantified since at present bottles and trays are often recycled together. Work is needed to improve the recycling of PET trays.’

The word ‘often’ might be better replaced with ‘always’ at the current time. Fundamentally, if a pure stream of PET trays cannot be recycled, are they recyclable? If a package is only recycled as a ‘tolerated contaminant’, and then, only partially so, is it really recyclable? If brand commitments to shift to recyclable packaging are to be made meaningful, then we need a better basis for determining what is, truly, recyclable.